Sir Walter Scott was an Edinburgh writer, who rose to fame as a poet and soon after a novelist and writer in general. He is most renowned as the founder of the historical novel genre featuring chivalry, romance and acts of gallantry. Scott’s influence on Edinburgh’s culture is epitomised by the opening of Edinburgh’s central railway station in 1854, given the name Waverley, after Scott’s novel.
Scott grew up in Edinburgh, spending his childhood years in the city and then going onto the renowned Edinburgh High School. He followed in his father’s footsteps and studied law at the University of Edinburgh and was called to the Bar by 1792. In 1796 aged 25 he began writing poetry alongside his legal career and five years after his marriage in 1797, he published his first collection, a three-volume set of Scottish ballads, The Minstrelsy of the Scottish Borders. From here he moved into publishing long narrative poems of great acclaim including The Lady of the Lake in 1810 and The Lord of the Isles in 1815.

His first novel, Waverley was published anonymously in 1814 and was the point at which Scott established the chivalrous and gallant historical fiction genre and from here he continued to write more of what are known as the Waverley novels including the famous Rob Roy, The Heart of Midlothian, Ivanhoe and many more. The novels were amongst the most popular across the whole of Europe and established Scott as one of the world’s leading authors.

Aside from his poetry and novels, Sir Walter Scott excelled in his legal career, becoming Principal Clerk to the Court of Session at Edinburgh and also contributing to the foundation of the Quarterly Review in 1809.

By the 1820s Sir Walter Scott had become one of the most famous men in Scotland, if not the whole of Great Britain and he was chosen to organise a visit to the Edinburgh for King George IV, a marker of how popular he had become. Scott died in 1832 in his home in Abbotsford, Roxburghshire, south of Edinburgh which he designed and had built.

The Scott Monument is only half a mile from The Royal Scots Club. In fact as soon as you turn up the hill towards Princes Street you will be able to see it!

Scott remains a core piece of Scottish and particularly Edinburgh cultural history. The Scott Monument towers over Princess Street Gardens and is the world’s largest monument to a writer. The foundation stone of the monument was laid in 1840, on the anniversary of birth and it was completed by autumn in 1844.  It stands at an impressive 200ft and 6 inches tall and is made from the Binny sandstone of West Lothian. It has 287 steps leading to the top and astonishing views of the city. 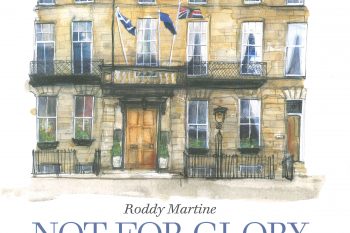